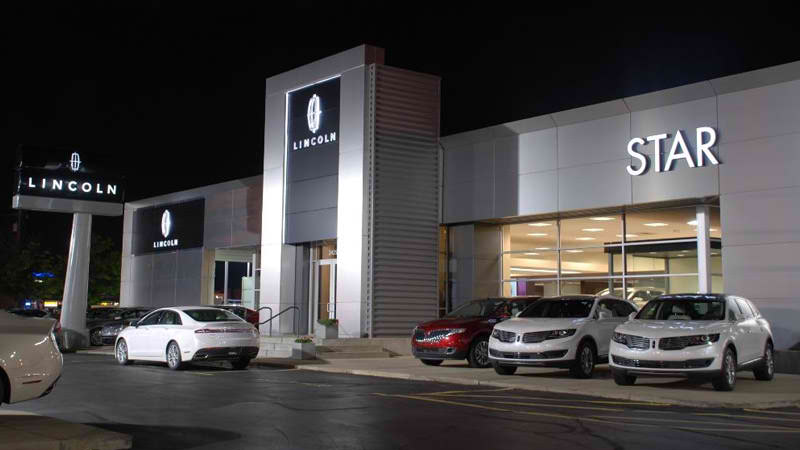 Located in Southfield, Michigan, Star Lincoln is one of Lincoln’s premier auto dealerships. After almost 50 years in business, the dealership initiated its first major architectural renovation in 2014. The original showroom was the first area to be transformed, and thereafter management researched next steps. “Outside of the showroom, it still looked like it was 1969.” said Manager Doug Leonhard.

Lumerica, a Madison Heights, MI LED lighting manufacturer, looked at lighting as not only an opportunity to provide great cost savings, but also to partner with Star Lincoln management to determine optimal light levels for the exterior, lots, and shop/maintenance areas. The result: an efficient and effective lighting plan.

Lumerica manufactured the vast majority of the LED lighting products, and partnered with TOGGLED, a Troy, MI based manufacturer, to provide LED tubes to replace 4ft fluorescent lamps. After completion, Star Lincoln is realizing an average 65% reduction in lighting electricity consumption.

What’s more, modular components mean Lumerica’s LED Light fixtures are serviceable – components can be replaced at end of life (rather than the entire fixture) resulting in significant long-term savings.

Star Lincoln is set up to save for years to come!

"The project started with lighting and since the savings were so siginificant, we were able to make more energy-efficient improvements. Lumerica and Energy Alliance Group's financing helped Star Lincoln move out of the 60's and into the 21st century."